Haya Omari: From Palestine to the Netherlands – Challenges and Accomplishments 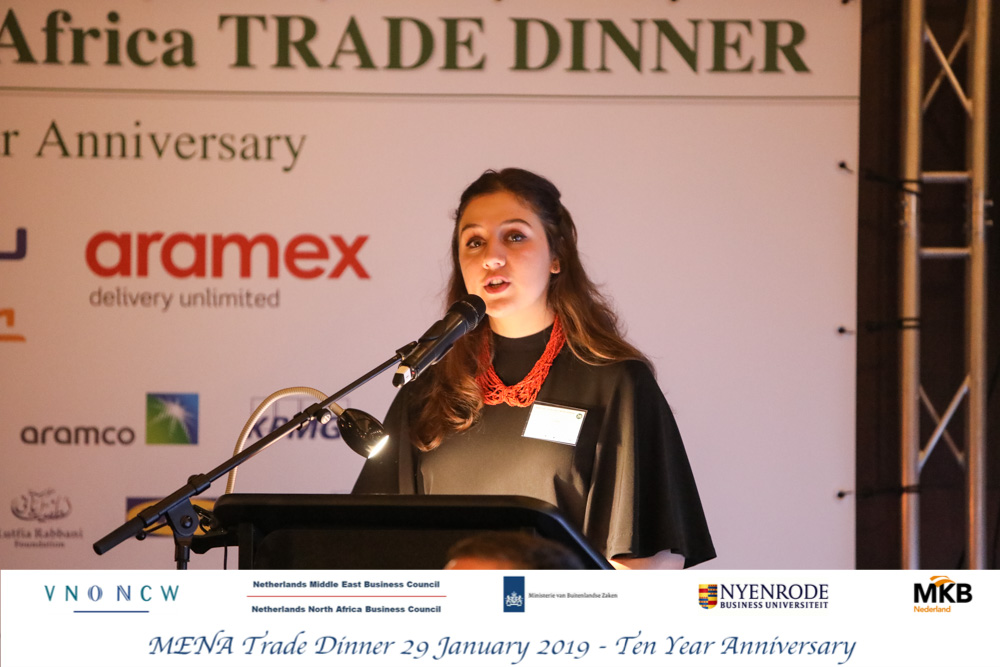 It gives me the great honor to address you on this special evening of the Tenth MENA Trade Dinner as one of the Mahmoud S. Rabbani Scholars of 2018/2019. I was kindly invited tonight to share with you my experience in the Netherlands and the importance of educational and cultural exchange.

My name is Haya Omari, a Palestinian from Jerusalem, and I am currently doing my master’s studies in Public International Law at Leiden University.

Many people ask me: ‘’Why did you choose to study in the Netherlands? ” My answer is rather a simple one: I love biking!

The Netherlands is THE place to study international law. We are right in the heart of the city of peace and justice; which is home to numerous international organizations and tribunals, like the ICJ at the Peace Palace and the ICC.

For the past 10 years, Palestine has been in the center of international legal debates. There is not one lecture in my programme where the case of Palestine is not mentioned. In a class filled with mostly European and North American students, I take this as an opportunity to represent the Palestinian voice. Other fellow students have expressed special interest in knowing more about Palestine and the Arab region after meeting someone from there, as if they have put a face to a country so distant from their realities.

During the first semester of my studies, I was chosen among 200 students to be one of nine members of the International Humanitarian Law Clinic of Leiden University. The IHL Clinic is a platform for legal research in various fields of IHL, especially around the recent armed conflicts taking place in the Arab world. In December 2018, the Leiden team eventually participated in the IHL Exchange conference in Rome where students from Western Universities come together to discuss IHL.

I believe that my participation as the only Arab student was crucial; as it allowed me to provide a different perspective to the issues discussed. As one of my professors told me: ‘’the strength of the Leiden team lies in its cultural diversity’’. I have also realized that people have different understandings of the law, which could lead to conflicts. However, it is because of our different backgrounds and ideas that communication and exchange become the most important tools towards the development and prosperity of our societies.

My stay in the Netherlands so far was not an easy one. Coming from an Arab society where people are warm and very interactive, I was quite surprised to learn that the Dutch society is more of an individualistic one. This made me prefer to engage more with internationals rather than the local people. However, when I found that I was still not satisfied with this, I decided to learn the Dutch language and took the Saturday market in Leiden as the perfect place to practice. I can honestly say that learning the language has definitely allowed me to feel more integrated into the society.

Thanks to the Rabbani Foundation, I was able to take this interaction a step further through participating in the Preparation Day of the Nour Project, which is an initiative that aims at bridging the gap between the Western and Arab culture through volunteer work. On two different occasions, together with Dutch students, I discussed topics related to misconceptions about the Arab culture, and women in the Arab world. We were able to break many stereotypes before the students head off to their designated Arab country.

I conclude with a question I was asked by a Dutch friend. She said: “what is the thing you will miss most when you leave the Netherlands?” I said: the freedom of choice; to have the opportunities to experience life, and to have options to choose from. These two will forever change a person’s life, and this is what the Netherlands has given me.

Speech delivered at the 10th Middle East North Africa Trade Dinner in The Hague, The Netherlands in January 2019.