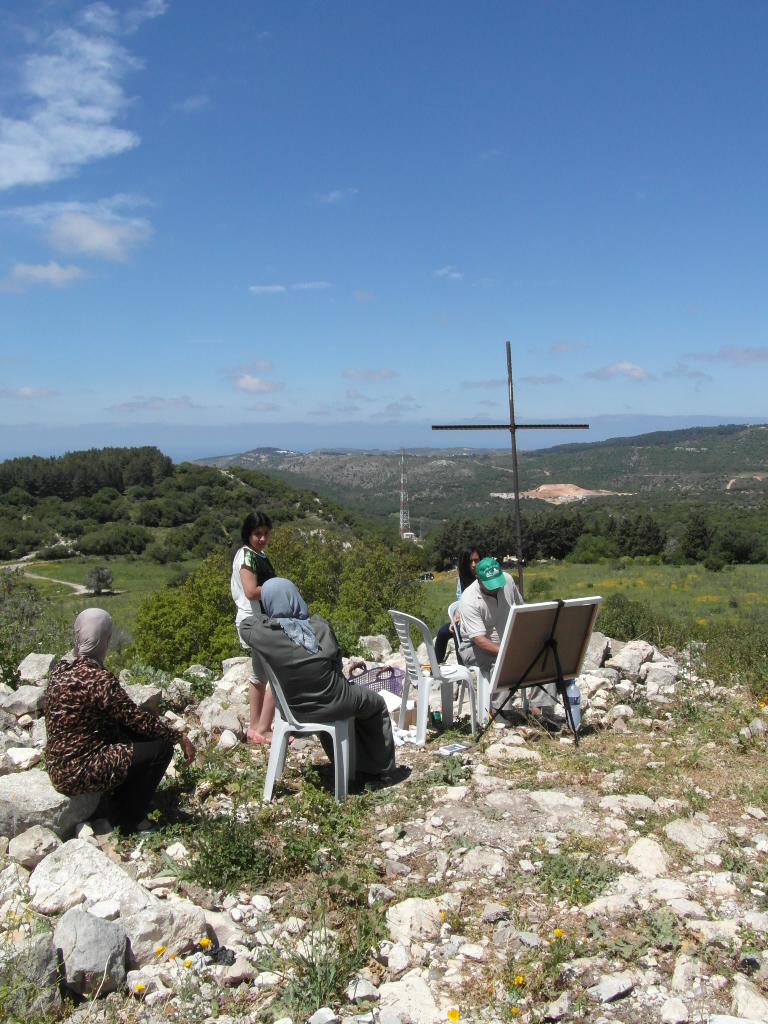 Sinsia van Kalkeren is a Master’s student enrolled in the Middle Eastern Studies programme at Leiden University. She is focusing her MA thesis research on globalisation and transnationalism in Palestinian hip hop. The Lutfia Rabbani Foundation is supporting her trip in Jerusalem where Sinsia will be studying Arabic, experiencing first-hand the Arabic quarters in Jerusalem and researching her thesis topic. These are her stories…

Music and hope around hilltop church

The Palestinian village of Iqrit vibrates with music. Different kinds of drums lie around the village, and inhabitants and visitors alike pick them up to start a jam at any hour of the day. Sunset, sunrise, or just a good vibe, in Iqrit anything can be a reason to start drumming or singing. This is not the only reason Iqrit is a special place, the more important one is that the village was destroyed by the Israeli Defence Forces during the Naqba of 1948, but inhabitants have been coming back to this village in the North of Israel ever since.

The only remaining structure of the village is the church, which functions as both a house of worship and a dormitory. When I arrived on the hill top, I was warmly welcomed and given a spot on the church floor to sleep. Music was made all night long, and although no one was asleep before two in the morning, everyone woke up at 6.30 to start cleaning the church for the service that would be held there a few hours later. This shows the dedication the youth of Iqrit has for the village. They take care of it because one day, they hope to rebuild it.

The young people living around the church now are of the third generation Iqritis doing sit-ins. The first one started in 1972 and lasted for several years. The second one took place in the mid-1990s and the third one started a year ago and continues to this day. Following a ruling by the Israeli Supreme Court that the evacuation of the village had been illegal, villagers have been fighting for their right to return since the expulsion. Their plea to the Israeli government can be summarised as follows: they want the right to return and rebuild, recognition of the suffering of the villagers and their descendants, and compensation for that.

The service held on the day I visited was attended by hundreds of original inhabitants and their children and grandchildren. The small church and the courtyard in front of it were packed with worshippers. The significance of this Easter service, which is after all about resurrection, was hard to miss, even for me as a less than fluent speaker of Arabic.

After the service, an art and music festival was held. People selling olive soap, traditional embroidery and jewellery mixed with people handing out political leaflets and selling t-shirts proclaiming solidarity with the people of Iqrit. On a stage artists sang famous folklore songs, accompanied by the oud, the ney and occasionally the didgeridoo. In front of the church, young dancers, accompanied by a narrator, performed a choreography about the story of the village.

All over the hilltop, families, young couples, and groups of friends were enjoying the music, sometimes picking up a drum themselves. Laughter and talk was all around, and food was happily shared. Just for an afternoon, life had truly come back to Iqrit, granting a glimpse into the past, and maybe, hopefully, one into the future.