Studying Preservation and Presentation of the Moving Image in Amsterdam 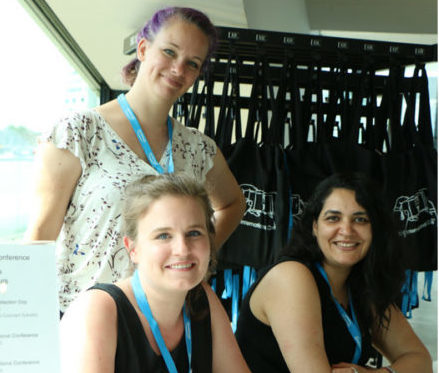 This is my final narrative report on my studies of the MA Preservation and Presentation of the Moving Image, at the University of Amsterdam, which have been generously supported by the Lutfia Rabbani Foundation in 2017. My course of study ran from September 2016 to March 2018. In the second year of this program, I focused my research and training in a more specialised manner by undertaking an individually tailored, project-based internship, as well as a project proposal course.

I applied for an internship position offered by EYE Filmmuseum, one of the partner institutions of the UvA P&P program. Through this internship, I became acquainted with the latest professional developments in film archives and attained specialised skills in the preservation and presentation of very unique audiovisual collections. This full-time internship lasted for 17 weeks (40 hours per week) and culminated in the writing of a report in which I evaluated my performance during the internship, reflected on the results of my labour, and related insights and experience gained to the theoretical knowledge I had obtained in the first year of the program.

I carried out a project that involved both practical and research tasks, under the supervision of both an archivist and curator and my academic supervisor.

At EYE I was working primarily with the Mannus Franken collection in collaboration with EYE Filmuseum’s curator for Dutch Film, Rommy Albers, part of the Dutch colonial film collection, as well as researching archival footage from the Middle East for various documentary projects. As part of this project I have also been exploring creative ways of reintroducing this collection, hidden in vaults since 1979, to a contemporary international public. Another aspect of this project has comprised restoring and digitizing archival films and conducting research on the Dutch Avant-guard movement in the 1920s and the specific social context of its collaboration with colonization in Indonesia and South America.

For me, this internship has been extremely valuable in offering an array of professional challenges and tasks, touching upon many contemporary archival issues: cataloguing, preservation and presentation in the context of a re-explored collection. This intellectual work appealed to me because it provided a fresh encounter with the question of how to facilitate access and contextualise holding in a relatively small yet potentially very culturally significant collection.

Mannus Franken’s filmography affords a number of historiographic entry points for media scholars, which has shaped how the materials arrived into the collection and how they may be potentially exhibited. The type of the physical materials and different versions of the same film has in turn affected how the materials were catalogued, restored and presented. Owing to the very physically and culturally heterogeneous nature of the collection and the multifaceted ambitions of the project at EYE, the internship provided an excellent testing ground for developing preservation planning. Moreover, the small scale of the collection gave me the opportunity to deal with complex preservation issues in an ongoing an iterative capacity. 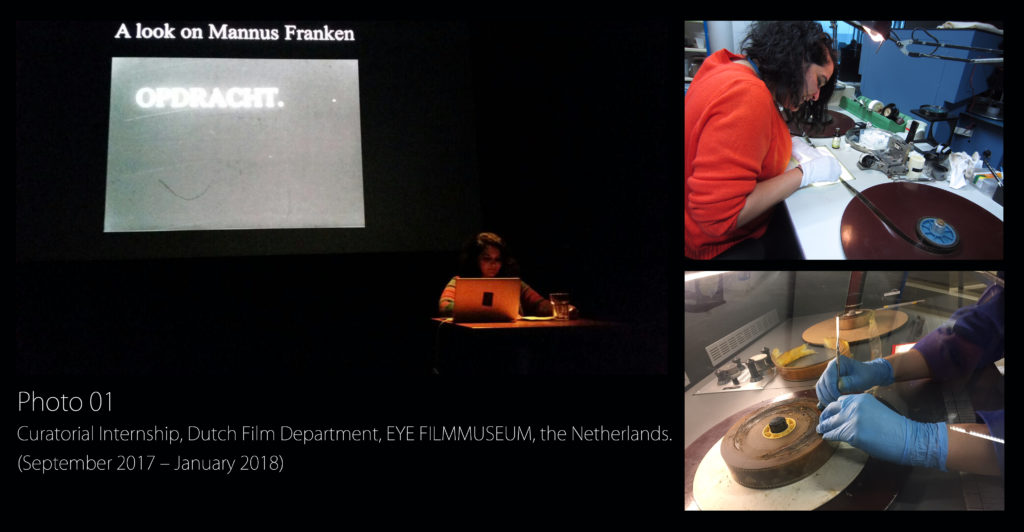 Despite the variety of duties this internship required, the previous year’s academic training offered me a considerable foundation for thinking through a concerted archival approach. The internship provided an opportunity to deal in a practical way with the technical, ethical, political and historical issues that I had deliberated over with classmates and professors previously. On a practical level, it enhanced my understanding of the analogue film technology, and made me more familiar with film materials, film formats, film handling and identification, and analogue playback and projection equipment.

Simultaneous to the internship I was also enrolled in a Project Proposal course in which I prepared and wrote a funding proposal for a pressing preservation initiative. This research proposal focused on forming the core of funded working group to deal with issue of underrepresentation of film heritage from the Global South within moving image archives, focusing on Egyptian film archives in particular.

This project proposed establishing a working group to evaluate the viability of dramatically intervening to arrest this trend by building an arctic cold storage bunker, giving priority to analog films from tropical countries whose long-term preservation may be deemed in jeopardy to climatic and socioeconomic concerns. This project sought to realize a sustainable model that inverts geographical hierarchies of preservation and selects films from hot climates to be transferred to a forbiddingly cold-climate facility as part of a globally administered film fund under the auspices of the Fédération internationale des archives du film (FIAF).

Establishing an autonomous fund from pooled international resources was proffered as ideal course of action for long-term posterity as opposed to simply re-allocating funds to various better-equipped national archives in hot and humid zones because this accepts global climate conditions and the history of curtailed preservation initiatives in existing institutions.

For example, a national film archive has existed in Egypt as far back as 1956, established under King Farouk. And Egypt did join the International Federation of Film Archives from 1958 to 1964, but lost its membership owing to administrative and bureaucratic reasons, only renewing its membership in 1970. In 1999, UNESCO allocated an amount of 72000 Egyptian Pounds to specifically purchase equipment needed by the archive but the administration channeled the money for other purposes. In 2010, Minister of Culture Farouk Hosny declared a Franco-Egyptian cooperation to establish a national archive for Egyptian films. The Palace of Prince Omar Tosson was chosen for the cinematheque headquarters. The job was meant to be done in one year, however, when the Ministry of Antiquities was separated from the Ministry of Culture, half the total amount (sixty million pounds) was taken as part of the budget for the new Ministry of Antiquities. In light of these facts, Egyptian film heritage is scattered in various locations, often not suited to film preservation.

Outside of this supervised formal study, I have also participated in a number of self-directed endeavours pertinent to moving image archives in order to expand my horizons and learn more about professional culture of the field. I took part in a research group on the topic archiving the revolution in the digital age, using online art platform and participatory archive concerning public memory of Egypt’s January 25, 2011 Revolution – a topic my master’s thesis explored in a more expansive way. And I volunteered with EYE in their annual conference Activating the Archive: Audio-Visual Collections and Civic Engagement, Political Dissent and Societal Change. The EYE International Conference 2018 also celebrated the 15-year anniversary of the MA programme Preservation & Presentation of the Moving Image (P&P) at the University of Amsterdam (UvA) and concluded with a graduation ceremony of approximately 150 alumni from all over the world. This was a very gratifying end to my studies and gave me further perspective on the professional and intellectual path on which I have embarked. 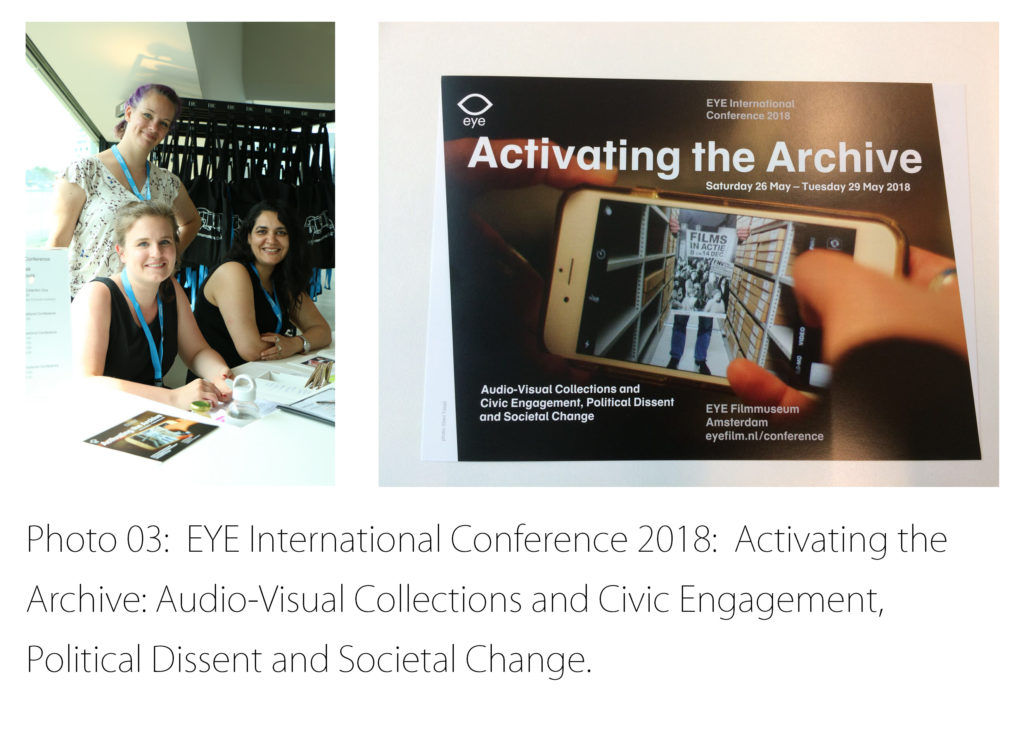 Throughout this semester I have really been provided with a wonderful opportunity to contribute to the fascinating work of a leading institution in the cultural heritage sphere – all dealing with important unwritten histories, under insightful supervision from very respected professionals and scholars.

However, due to its short period, the internship did not give me the opportunity to have a deep knowledge of film restoration and preservation techniques, either in analogue film materials or in born-digital films. Therefore, I have decided to take advantage of the orientation year the Dutch government offers to International students after graduation to engage in more technical oriented traineeship. In February 2018, I started a six-month traineeship at EYE collection centre, working specifically on their nitrate collection. This will be followed with another traineeship focusing on the use of digital film as a preservation and presentation strategy for enhancing access to collections.

The Lutfia Rabbani Foundation generously supported my studies of MA Preservation and Presentation of the Moving Image, at the University of Amsterdam in 2017. My course of study ran from September 2016 to March 2018. In the second year of this program, I focused my research and training in a more specialised manner by undertaking an individually tailored, project-based internship, as well as a project proposal course.

This string of opportunities, intensive and focused as they are, which I expect to round out my knowledge and skillsets in a very competitive but also very niche field, would not have been possible without the generous support of the Lutfia Rabbani Foundation. I am extremely grateful for this support, both moral and financial. Without it, I would not have been able to complete my studies and begin this exciting career.