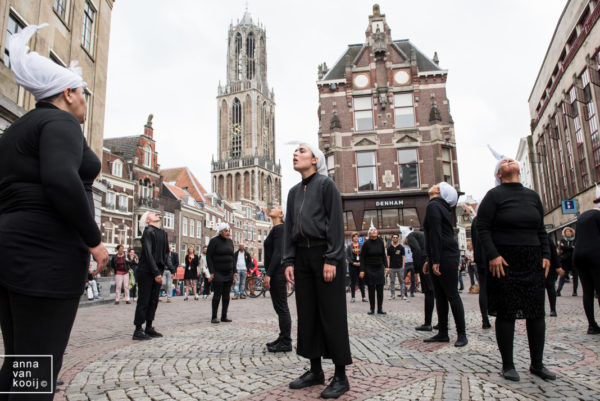 “Corbeaux was not created as a traditional show, but more as an experiment to branch out of the constraints imposed by  the demands of the theater and stage. What I wanted was to take over the Streets of Marrakech and fill them with a horde of crows, ageless and disparate. Like an immediate act, a sound sculpture, raw and urgent, resounding infinitely.” – Bouchra Ouizguen

SPRING Performing Arts Festival asked choreographer Bouchra Ouizguen to take over the streets of Utrecht too. And this is what she did  from 18th to 21st of May 2017.

First of all, Bouchra came to Utrecht in April and gave a series of workshops for 60 women from Utrecht. They were aged from 15 to 55 and came from diverse backgrounds, Dutch and Moroccan, amateurs and professional dancers, theatre goers and newcomers to contemporary performance.

From all the participants Bouchra chose about 15 women, who joined the 10 Moroccan dancers that came with her to Utrecht. The Moroccan and Utrecht women rehearsed for a few days together. Then they performed Corbeaux six times on Stadhuisbrug and in the shopping-mall Kanaleneiland. Corbeaux is an ecstatic and mesmerizing performance. About 1600 people watched the 6 performances in public space copresented by SPRING and Dancing on the Edge Festival.

It is Bouchra Ouizguen’s way of exploring essential, relevant issues, taking a closer look at origins and relations, identity and emancipation, and the visibility of (Muslim) women in society and in the streets.

The reactions of the audiences were strong and very diverse. Some people were moved to tears by the strength and the vulnerability of the performers. But we also experienced some xenophobic reactions. Some people were shouting „minder! minder!“ referring to the famous speech by Geert Wilders. Some people tried to walk violently through the group of performers. We experienced youngsters stopping on their way and saying „fantastic“, fascinated Moroccan children being dragged away by impatient fathers, older women in scarves stopping for a long time, alcoholics on Stadhuisbrug watching several times and tourists interrupting their sightseeing.

The strong reactions show, that the performance hit an issue in the political climate in the Netherlands. It is quite an achievement to do so with a dance performance that does not use text or narrative and does not convey a clear message, but insists on the ambiguity every good piece of art has. Just the strong presence of the women performing in public space with traditional scarves was a statement. The movements were not traditional, which led some people to saying: „this is not Moroccan“, as if everything in Morocco is traditional. Ouizguen is very much aware of the tradition in her country, but she is a contemporary choreographer and this art form exists also in Morocco. The performance was challenging our notion of a country, which is often perceived as „not modern enough“.