Desiree Custers is a Bachelor student of Arabic and Islamic Studies at KU Leuven and holder of a Masters in International Relations and Conflict Studies. Additionally, she has a bi-lingual Arabic/ English blog and makes artworks around the issues of conflicts and identity.

In the fall of 2018, I was lucky enough to be accepted for an internship with EcoPeace, an environmental organization with offices in Amman (Jordan), Ramallah (Palestine) and Tel Aviv (Israel). I was also lucky enough to be awarded with a travel grant from the Lutfia Rabbani Foundation. 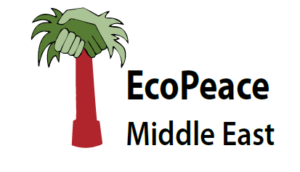 My internship took place in the context of getting my Masters’ degree in ‘Arabic and Islamic Studies’, for which a period abroad is required. I chose EcoPeace (founded in 1994) for my internship because it works in Jordan, Palestine and Israel and each of their three offices share the goal of combining peace-building with environmental protection.

EcoPeace is especially invested in water sustainability, a much contested issue in this region of the Middle East. Although the three countries shared water sources including the Jordan River and the Dead Sea the equal sharing of this water has been subject to political obstacles. The water shared between the three countries

Furthermore the water sources are to various degrees exploited by all three countries. One example is the fact that they discharge their untreated or poorly treated sewage water into the Jordan River and divert water from the Jordan River and the Yarmouk river leading to the shrinking of the Dead Sea. The Jordan River itself has in the past 50 years been reduced to 2% of its original flow.

The Jordan River which has been reduced to 2% of its original size. EcoPeace aims to rehabilitate this river and restore its environmental and ecological value.

My internship entailed many different tasks, from logistic work to writing articles, and were largely related to a few noteworthy events I participated in. One of the most noteworthy in my opinion was a five-day workshop titled Middle East Water Security and Environmental Peacebuilding that took place in December, 2018. During this workshop, which took place in the ecological recreational park of EcoPeace, the organization had invited many international activists on water issues with whom they shared their experiences dealing with promoting water sustainability in conflicted areas. Through the workshop I learned about water issues in among others Nepal, India, Iraq and Chile.

Aside from learning about water sustainability, my stay in Amman allowed me to learn more about the city of Amman, the Jordanian and Levantine culture and the Arabic language. I for example I took transportation to work every day which let me be ‘between the people’ allowed me to see a very local and daily aspect of the city in a safe and easy way: from making friends with some of the many Asian women living there to witnessing a screaming driver because one of the passengers lit a cigarette. 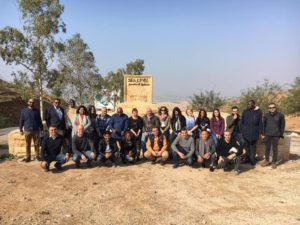 EcoPeace’s work and the extensive knowledge I obtained during my internship has convinced me even more than I was about the importance of environmental protection and water security as I learned that water issues do not only effect the environment, but also play a role in (future) socio-political upheaval. EcoPeace has played in important role in aiming to keep conflicts over water to a minimum, and I hope I can find a career in an organization impacting the world in a similar manner.

Obtaining the travel grant made me feel that I have something to offer when it comes to the European- Arab dialogue. This in combination with my internship experience where I put my communication and writing skills to use, motivates me to look for a job in a similar field in the future: be it environmental peace-building, facilitating negotiations or within the field of cultural exchanges.  The grant made it possible for me to discover this career interest during my stay abroad.