Dancing on the Edge 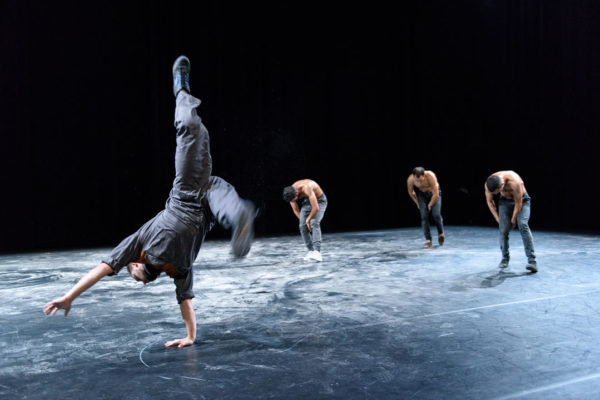 After a one-month residency period a first showing of the new theater piece Plastic, of the upcoming director/choreographer Meher Debbich Awachri (Tunisia), is presented at Het Huis Utrecht on Tuesday 2 December. This work-in-progress is followed by an in-depth after talk, where the artists will discuss their work process. The audience is asked to give their feedback.

A foreign capitalist with a head of plastic bottles; young Arab people, who do not speak real Arabic; a ruined place invaded by plastic on an Arab land not really identifiable; everything starts directly from the satirical image of a boss and his well exploited workers… They sympathize with each other, they fight and launch a war… but actually all they do is swimming in tons of plastic. They are all strong men ready to sacrifice their bodies and their souls; like real soldiers they defend their principles, their dreams, their plastic bottles!

Plastic is physical theater, and deals with a new generation of young men in the Middle East and North Africa, who are stuck between expectations and reality, and who feel the heavy burden from the generations before them. Plastic will be performed by dancer/choreographer Hussein Khadour (Syria), dancer Hazem Header (Egypt), actor Mahrez Taher (Tunisia), and the Dutch based dancer/actor Maciej Beczek, who was selected during an audition held in September 2014.

This first residency period is supported by Hivos and the Lutfia Rabbani Foundation and was organized in collaboration with Het Huis Utrecht and the Henny Jurriëns Stichting. A second residency period is to follow in 2015, after which the performance will premier during the fifth edition of the Dancing on the Edge Festival in November 2015.

Meher Debbich Awachri (Tunisia) is a theater director, actor and dancer. After a baccalaureate specialized in theater, his vocation appeared naturally, i.e., he wanted to become an actor. In 2011, he left the Superior Institute of Dramatic Art of Tunis with his final studies project D-Sisyphe, which was an immediate success. The performance got the 1st price in Thespis, International Monodrama Festival in Keil, Germany. It was also performed during the Dancing on the Edge Festival 2013.

This project is organized by Dancing on the Edge is a non-profit, project-based organization which stimulates artistic exchange with the Middle East and North Africa (MENA region). The focus is on contemporary art of high artistic quality, often by a young generation of artists searching for new cosmopolitan Middle-Eastern art forms, working with contemporary themes and looking for links to socially relevant subjects. See also: www.dancingontheedge.nl.