Lakhdar Brahimi (1934) is an Algerian diplomat with a lengthy career in conflict prevention, conflict resolution and post-conflict reconstruction. From September 2012 until May 2014 he served as the United Nations and Arab League Special Envoy to Syria. Mr. Brahimi also advised the UN Secretary General on Iraq (2004) and Afghanistan (2001 – 2004).  In 2000 he chaired an independent panel to review United Nations Peace Operations. The resulting report that’s widely known as the ‘Brahimi Report’ assessed the shortcomings of the existing system of peacekeeping and made specific recommendations for change, focusing on politics, strategy and operational and organizational areas of need.

Prior to his first Afghanistan appointment, Mr. Brahimi served as Special Representative for Haiti (from 1994 to 1996), and Special Representative for South Africa (from December 1993 to June 1994). In the latter position, he led the United Nations Observer Mission until the 1994 democratic elections that resulted in Nelson Mandela taking the presidency of post-apartheid South Africa. He has also undertaken special missions on behalf of the Secretary-General to a number of countries, including former Zaire Yemen, Liberia, Nigeria and Sudan.

Mr. Brahimi was Minister for Foreign Affairs of Algeria from 1991 to 1993. He served as Rapporteur to the 1992 United Nations Conference on Environment and Development (the Earth Summit).

From 1984 to 1991, he was Under-Secretary-General of the League of Arab States, and from 1989 to 1991, served as Special Envoy of the Arab League Tripartite Committee to Lebanon, mediating the end of the civil war in that country.

Mr. Brahimi was a Diplomatic Adviser to the President of Algeria from 1982 to 1984, Ambassador to the United Kingdom from 1971 to 1979, and Ambassador to Egypt and the Sudan, as well as Permanent Representative to the Arab League in Cairo, from 1963 to 1970.

From 1956 to 1961, during Algeria’s independence struggle, he was the National Liberation Front (FLN) representative in South-East Asia, resident in Jakarta.

Currently Mr. Brahimi is a member of The Elders and the Global Leadership Foundation. In addition, he’s a governing board member of the Stockholm International Peace Research Institute. 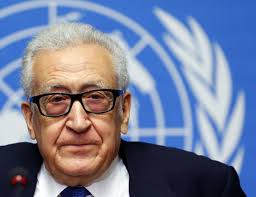