He is author of several acclaimed books, including the newly-released – The New Middle East: Social Protest and Revolution in the Arab World (Cambridge University Press, 2013); Obama and the Middle East (Palgrave and MacMillan, 2012); The Rise and Fall of Al Qaeda (Oxford University Press, 2011); The Far Enemy: Why Jihad Went Global (Cambridge University Press, 2009); America and Political Islam: Clash of Cultures or Clash of Interests? (Cambridge University Press, 1999); and The Superpowers and the Middle East: Regional and International Politics (Oxford and Westview Press, 1993).
His articles have appeared in The New York Times, The Washington Post, The Los Angeles Times, The Christian Science Monitor, International Herald Tribune, The Baltimore Sun, The Guardian; The Independent, Foreign Affairs, Foreign Policy, Newsweek, Middle East Journal, Survival, the Guardian, and many others.
He has been the recipient of a MacArthur, Fullbright and Carnegie Fellowships and his books have been translated into a number of foreign languages.

His special interests include Islam and the political process, and mainstream Islamist movements and jihadist groups (like the Muslim Brotherhood and Al Qaeda); Arab politics and Muslim politics in the 20th century, the international relations of the Middle East, political economy of the Middle East, risk analysis, state and society in the region, the Arab-Israeli conflict, American foreign policy towards the Muslim world, the modern history of the Middle East, history of conflict, diplomacy and foreign policy, and historical sociology. Gerges has given scores of interviews for various media outlets throughout the world, including ABC, CNN, BBC, PBS, CBS, NBC, MSNBC, NPR, CBC, and Al Jazeera. 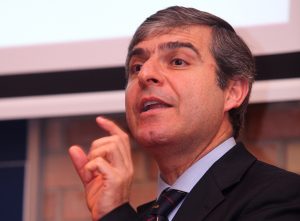