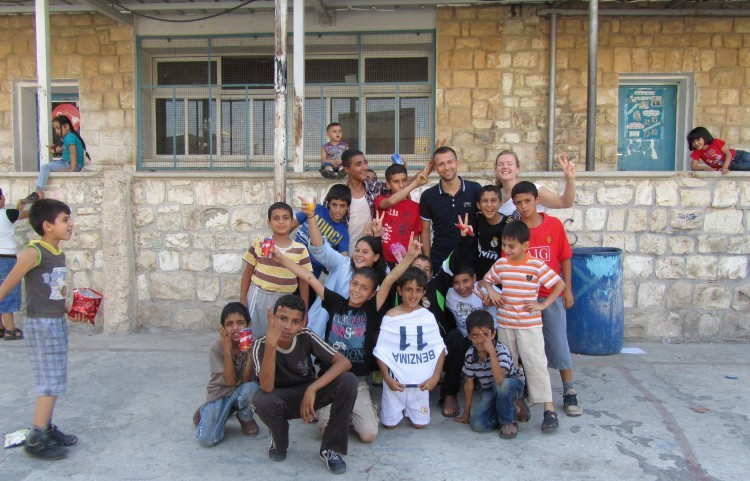 Experiencing Palestine through its people

When people think of Palestine (or Israel), they usually think of conflict. They think of a country where two groups of people with two different religions clash. This is the story of how I discovered first hand that there is much, much more to this country.

I took part in the IMSTAR-project, which provides medical students with the opportunity to learn more about the situation in Palestine-Israel through lectures and a 4-week programme in Nablus (West Bank, Palestine), which consists of an internship in the emergency department of the Rafidia hospital and social work in the Balata refugee camp.

It was very exciting to travel to a place with such a moving history and rich culture. Visiting Jerusalem, which is of significant importance to 3 different religions. I was keen on getting to know the people and understanding the situation better. As a medical student, I was also interested in the organization of the health care system and experiencing what it’s like to work in a hospital in the West Bank.

I set out from Tel Aviv and travelled to Nablus via Jerusalem. The scenery was amazing and the climate perfect, though the trip was marked by the noticeable tension I felt while driving along the separation wall and through checkpoints. The wall was an especially sad reminder of the current situation.

My internship at the Rafidia hospital, which is one of the two major hospitals in Nablus and funded by the government, was about to begin. My work week was Sunday to Thursday, as weekend is on Friday and Saturday. Established in 1976, Rafidia is the largest hospital in the Northern West Bank. My internship began in the emergency department. During my first week here I saw not only numerous medical emergencies, but also miscellaneous less severe cases. Since there are no general practitioners in Palestine, patients go directly to the hospital, primarily to the ER, where they get treated or referred to another department. I saw patients with deep wounds, cuts and fractures. It is not the most modern hospital; most spaces were not air-conditioned and some supplies, such as sterile surgical gloves, were available only in limited amounts. It was also not uncommon that the lights fell out because of an electricity cut. Still, patient care was a priority and some interventions and operations had to continue, oftentimes with impressive improvisation.

The patient’s attitude towards the doctor was also remarkable. Although they thought that everybody that wears a white coat is a doctor, there was tremendous respect nevertheless, and doctor’s orders were taken very seriously.

During the remaining three weeks I had the opportunity to see different departments. At gynaecology and obstetrics I assisted with a childbirth for the first time. It was an amazing experience. Generally there were between 20 and 30 births a day, which is an impressive amount. At pediatrics I saw different interesting cases, but what I liked most was the neonatal intensive care unit. Examining a premature child is a whole different experience. This department was, in contrast to the rest of the hospital, very modern and was equipped with advanced technology.

In the afternoons I was active in the Balata refugee camp, together with other Dutch and Palestinian medical students. We provided classes for children who were between 4 and 12 years old, who usually spent their summer days hanging around on the streets. The classes included English, handcrafts, painting, sports and music. It was really great to see the smiles on their faces every day. I made new friends. Through different kinds of social activities I got to know the Palestinian students better. They really made me feel at home in Nablus. Together we had many laughs, shared experiences and thoughts.

Now, when I think of Palestine, I think of beautiful, warm and welcoming people who made my stay in this beautiful country very pleasant. I think of people who don’t let the situation get the best of them and who keep on working to achieve their goals. It’s really inspiring. Regarding the aims of the Lutfia Rabbani Foundation, including ‘To foster mutual understanding between Europe and the Arab world through cultural and educational exchange’, I would say mission accomplished.