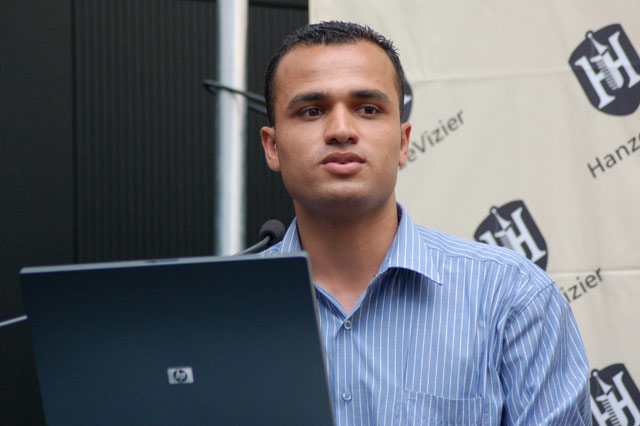 Thank you, The Netherlands

If you asked me to name Europe’s primary economic gateway, I would immediately reply “The Netherlands.” Home to internationally recognized brands such as Royal Dutch Shell, KLM, Philips, Heineken, DSM, ING Bank, ABN-Amro Bank, and Akzo-Nobel, as well as a primary exporter of agricultural products, their famous tulips are exported as far as Saudi Arabia, Jordan, and Qatar, and all over the Middle East. However, the Netherlands is arguably known best for The Hague, the world capital of peace, justice, and human rights.

As a Palestinian who spent most of his life in the Gaza strip, I would have known only one or two of those names before receiving the opportunity to get to know the Netherlands. I was born in the Rafah refugee camp of the Southern Gaza Strip, and am the eldest of seven children. For most people in my camp, the opportunity to interact and live within another culture is rare. I feel blessed that it is the Dutch culture which first embraced me and honored that the nation and its people have provided me with the opportunity to pursue an advanced degree.

My educational adventure in The Netherlands commenced when I received a scholarship from the Lutfia Rabbani Foundation and the Osscar Fellowship. It was through this that I obtained my MA in International Political Economy and Development, a study which was part of The International Institute of Social Studies of Erasmus University in Rotterdam. This was largely made possible by the former rector of my institute, Prof. Louk de la Rive Box, a man who mentored me on the application of academic skills and nuances of good research. His tutelage sustained me through the many challenges I faced and provided me with the glimpse of hope so necessary when the future appeared bleak and gloomy.

The University opened its doors to me. It provided me with the opportunity to expand and engage my academic peers from all over the world. I was able to choose my supervisor from anywhere: the Far East, North America, Europe and even the Middle East. This was a unique opportunity which provided me with more techniques for researching media representation and journalism, as well as allowing me to gain a better understanding of other cultures and the different paradigms of political science.

I continue to be in awe at the variety and depth of resources available to me in Europe: books, online journals and sources for literature in the field of my study. In Gaza our university libraries and resources are mediocre at best. At a Dutch library I ordered books that would arrive in three days. If it wasn’t available in my library, it would be easy to find somewhere close by. Worst case scenario, if no library has it, a researcher may ask the library to order the book or the journal needed. This would be nearly impossible to do in Gaza.

I completed my MA and research paper in International Political Economics and Development in December 2010, a feat which would have been impossible without the support of Professor Louk de la Rive Box and his wife Barbara. I also want to extend my thanks to my supervisors and the dozens of friends whose efforts in assisting me helped me develop my ideas for a doctorate at Erasmus University in Rotterdam, and encouraged me to travel to Columbia University in New York as a visiting scholar.

In addition to embracing the Dutch educational system, the second blessing is to be part of the experience the land of tulips and windmills and the opportunity to explore ideas from the vantage of my peers from all parts of the developing world. This enabled me to foster a better understanding of other cultures and has opened my eyes to different solutions to global problems. Indeed, this experience was a simulation of the greater global community around me. By opening gates of dialogue and sharing rather than shuttering borders, I learned that all nations benefit from the exchange of people and ideas. It is only through dialogue and mutual understanding that we can improve the world we live in and foster mutual understanding between Europe and the Arab World.

If I were asked to sum up my opinion in a single thought, I would say the world is one city and the Dutch education system is indeed a fascinating experience. It is here that I gained valuable experience and greatly expanded my knowledge and understanding via my wonderful peers.